Though retailers were given four years’ notice, the onset of EMV chip payment has been a slow transition. The bigger banks pushed consumers to make the switch by sending many cardholders new, chipped cards for free. Retailers, however, have been less quick to make the change. This is also the case for many retail point of sale companies. But if you are a retailer who hasn’t done so already, this is a critical change to make.

Should retailers accept EMV chip credit cards? The short answer is yes.  Here is a guide to EMV technology and why it’s important for every retailer to use.

Over the past several years EMV chip cards have been quickly replacing magnetic strip cards in people’s wallets and purses. While many still have the option to swipe or “dip,” the payment industry has made a concerted effort to replace all magnetic strip cards with chips or contactless payment.

Retailers have had to adjust as well. October 1, 2015, was the deadline for most retailers to make the switch to EMV capable credit card machines. Short for Europay, Mastercard, Visa (the three companies responsible for the technology behind the payment method), EMV chip payments are intended to reduce credit card fraud, thereby protecting consumers, retailers, and banks.

How Is EMV More Secure?

Magnetic strips, on the other hand, contain the exact same information throughout their entire lifespan. This means that once compromised, a criminal can easily use that information to make fraudulent purchases as long as the card is active.

There was also a difference between chip-and-pin versus chip-only. Internationally, most retailers require chip-and-pin. The United States typically accepts chip-only payment. Some retailers may still ask for a signature, but this is not essential for completing a proper transaction. Chip-only is less secure than if a pin is also required, though both methods are much more secure than a magnetic strip.

As of 2018, card-present credit card fraud has sharply declined. Prior to EMV payments, fraud through copying the banking information from a magnetic strip was rampant. According to the Aite Group, it accounted for 37% of all credit card fraud in the United States. While EMV payments will not completely eradicate credit card fraud, minimizing this form of it could make a huge difference.

So far, it seems that EMV chips have significantly minimized this form of theft in all countries that have implemented it. Unfortunately, credit card theft in other capacities has increased, particularly card-not-present (CNP) fraud online. This has offset some of the fraud prevention successes that EMV payment has achieved. 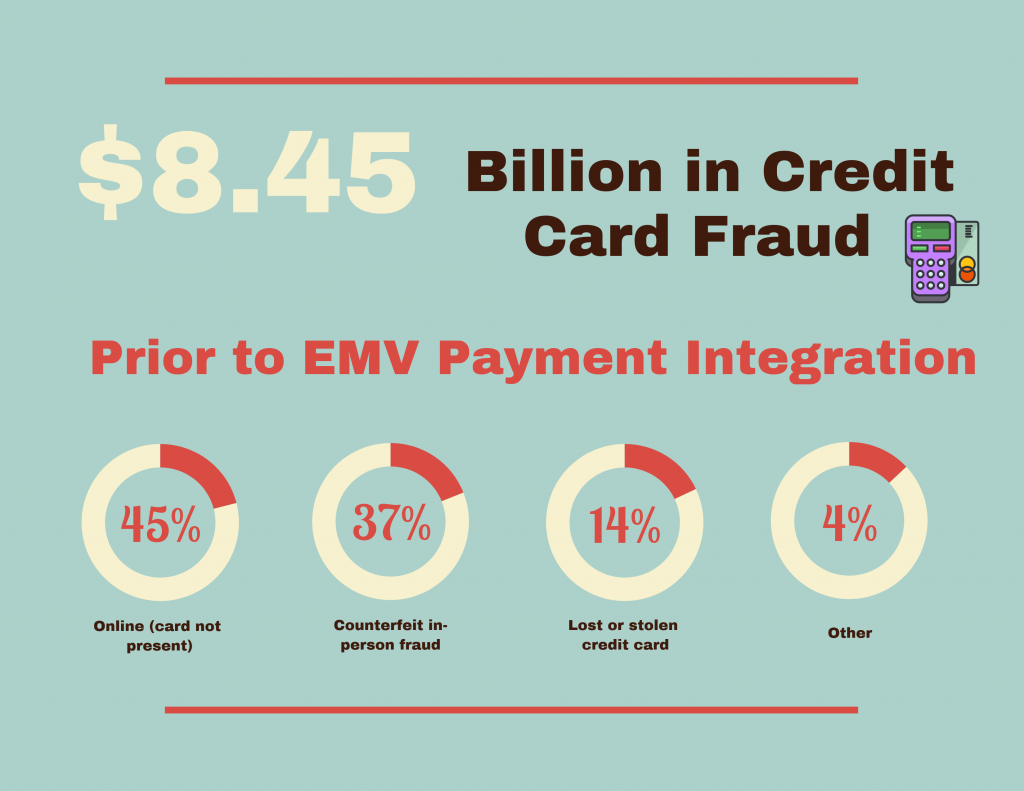 How Does It Affect Retailers?

No retailer is forced to carry an EMV chip reader in their store. This change is not a law, but rather a liability issue. The major card associations, however, have heavily incentivized both the cardholder’s bank as well as the retailer to make the transition. If a bank has not issued a chip-enabled card, and if a fraudulent transaction is completed, the issuing bank is responsible for compensating the cardholder. Likewise, if the merchant does not offer a chip-enabled reader, you, the retailer, are responsible for any fraudulent transactions.

By 2018, nearly 100% of consumers have been issued EMV capable cards. And most large- and medium-sized businesses have followed suit and integrated chip readers. Small business owners, though, have been slower to make the change, leaving themselves vulnerable to fraud.

Is It Expensive to Make the Switch?

For large retailers, yes. A full revamp of all credit card readers, and a modern POS system which is integrated with EMV payments will be an expensive switch. But for most small businesses, the cost is minimal. At most, a new credit card reader will cost a few hundred dollars. In some cases, credit card processors will provide merchants with a free upgrade. Either way, the cost is nothing compared to the potential fraud for which you may have to pick up the bill.

So if you haven’t made the switch already, contact your credit card processor about it. And make sure that your POS system is fully integrated into the hardware as well. There are still many point of sale solutions that aren’t compatible with the new chip technology.

Are Retailers Ever Responsible for Fraud Once Making the Switch?

Not really. The idea behind the chip technology is that once both the consumer banks and the merchants make the transition to the new payment method, card-present credit card fraud will be nonexistent. Just be careful to still check for appropriate identification if the transaction is chip-only rather than chip-and-pin. Follow traditional best practices with credit card transactions to add that final level of security to the process.

Finally, be sure to pass the three levels of certification for your EMV system. The first two levels simply involve testing the hardware and software for any security threats. The third confirms that the system is compatible with every card type and transaction.

Will EMV Slow Down Transactions?

Typically, the actual processing time for an EMV card is slightly longer – the machine has more complicated information to decipher and communicate. But some POS solutions are getting much faster at processing the information. Additionally, many transactions don’t require signatures at all, or at least on a hard copy of a receipt, compensating for a longer transaction time.

Contact us at KORONA for more information on how your retail POS system works with you to protect your business from fraud and theft. Our POS system is fully integrated with all chip readers, giving you peace of mind for your retail business. And learn more about contactless payments, the Apple Card, and other new payment types.